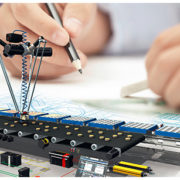 Al Ammar & Partners Electrical Company (APeCO) was established in Kuwait in 1977 as a small operation by the partners Abdullah Al Ammar and Haydouk Azarian. It had all started a couple of years earlier in 1975 when they had opened a small shop that sold electrical parts and components.

As the company continued growing, in 1992 the trademark and logo APeCO was coined for the company. APeCO has since grown to become the number one player in the electrical control and automation market in Kuwait being the selected local distributor for some of the leading global manufacturers in the field. Its broad high-quality product range meets the needs of the Do-It-Yourself (DIY) customers as well as contractors’ specifications for government and private industrial automation contracts.